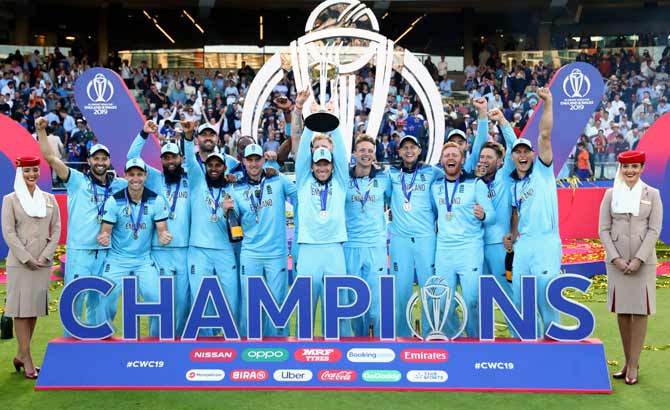 The ICC Cricket World Cup is the dream event of every cricketer and cricket fans alike, as the former looks for an opportunity to be a part of their national legacy, and the latter wants nothing but to see the trophy in the hands of their favourite team.

In the 45 years history of ICC Cricket World Cup, we have been gifted with numerous breathtaking and record-breaking performances, surprising victories, shocking defeats and more than everything, the building of legacies. Though we have seen all of these in the earlier world cups, no one could have ever anticipated the outcome of the 2019 world cup, especially the historical end of the final game. In fact, it would also not be an exaggeration to say that we have seen it all in just a single match.

The World Cup of 2019 began with a round-robin tournament format, making every team to face each other at least once. With 10 teams planned for contest, 8 teams were awarded direct entry owing to their top rankings in the ICC ODI points table. 2 other teams were selected through qualifiers, held in March 2018. This One Day International (ODI) series was hosted by England & Wales, and the tournament was held between 30th May and 14th July of 2019.

Forty-five matches were conducted in the group stage, and every team had 9 matches, one for each opponent. By the end of the group stage, the top four teams in the points table were selected for semi-finals. India and Australia won 7 matches each and were placed at the first and second position in the points table. England took 3rd position after winning New Zealand in its last qualifier match. This match was so crucial to the team of England, as a defeat could have placed them in the 5th position. New Zealand took the 4th position, leading Pakistan just by net run rate.

The first match of the semi-finals saw India losing to the bowling excellence of New Zealand. Kane Williamson and Ross Taylor delivered a decent score for the team, while bowlers Mitchell Sautner and Matt Henry destroyed the Indian batting order. Even though the middle order of India performed well, it just wasn’t enough to assure a victory. New Zealand won the match by 18 runs.

The second match led to the shocking defeat of Australia by the hands of England. Australia suffered an all-out at 223, by the powerful bowling of England. The score was easy enough for England to chase, with more than 17 overs to spare.

In the finals, New Zealand scored 241 as they chose to bat first and England ended up scoring the same, mostly by the efforts of Ben Stokes in the final over. As it came to a draw, this match became the first-ever world cup final to require a super-over. As the super-over results were also inconclusive, it became the first-ever world cup match to be decided by the boundary count.

By this way, England won their first-ever World cup after so many years of anticipation by fans around the world. The final moments of the game were considered by many international critics and fans as one of the most dramatic moments in the history of cricket. With such a cinematic experience, the world cup of 2019 had clearly raised the bar for the future of international cricket.